Anyone who is interested to peek into our latest ZX demo might take a look on the sources of the first part done by me (omega). In attached archive shall be all required files needed to build the demo.

You need SJASM+ from Aprisobal, but with some tweaking you might be able to adjust the source for compiler of your preference.

This demo is timed for ZX Spectrum 128k (+2). It should not be an issue to create +3 version or version for other ZX clones.

This demo was started on Shucon 2009. Idea of the colour mode came from Fikee. I thought it might look interesting with classical plasma effect. Well, it does. The main plasma effect was written on Shucon, as well as scroller.

After Shucon I did not find time to work on it, work was stopped... Due to quite long summer, I started to travell to work via train. I gained 40minutes per day and I started to work on E2 again. I modified display routine to add border, then structures for various items (bars, vu-metters...etc.). 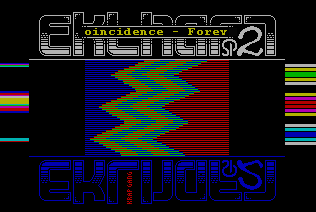 Poke was working hard on his amazing part with SiD voice. I made graphic design, custom graphics convertor was created for this 3-color mode, as well as "pixel scrambler" to eliminate flicker in chessboard pattern.

At the final stage (a week before release) we hectically worked with Zoom to add graphics, finetune texts, timing of the demo, intro sequence... etc. Zoom made beautiful soundtrack and very nice Eklhaft logo, also small bits of in-demo graphics. I would also like to mention that Shriu sent me a fast PT3 player (from Alone Coder) that significantly increased available number of T-cycles :-) Thanks!

Timing of the demo sequence was not that diffucult as I thought. I made "executor" routine, that is basically calling other routines (effects) each frame interrupt for defined number of frames. Demo runs based on the "script", just like a movie (e2_timetab.a80). It was surprisingly simple to make E2 construction in the beginning sequence. 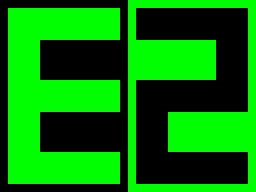 hello there. What can i do for you hehes thanks

i registered 2 weeks ago but i cant find where can i search any words.

Como se llamo esto i am from SPAIN

Como se llamo esto i am from SPAIN

Subject: I want to explain you about pandemiuc

hi, i am woo from Sweden and i want to explain any thing about &quot;pandemic&quot;. Please ask me :)

Subject: I want to explain you about pandemiuc

hi, i am woo from Sweden and i want to explain any thing about &quot;pandemic&quot;. Please ask me :)